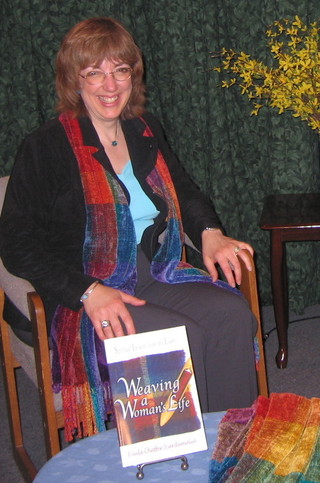 Before I tell you about my own process, I want to give a big thank-you to Paula Chaffee Scardamalia for inviting me on this Writing Process Blog Hop. Paula is the dream consultant for PEOPLE Country Magazine. She’s also a book and creativity coach, and dream and tarot intuitive. Since 1999, Paula has taught writers how to use intuitive tools like dreams and the tarot to tap into their creative flow. She has taught at small private workshops on the East Coast, and at both national and regional Romance Writers of America conferences and meetings, and at the 2014 San Diego University Writers Conference. She leads intimate writing and creativity retreats both in the US and abroad. Paula publishes a weekly e-newsletter on creativity, dreams, tarot and the inspired life, and is the award-winning author of Weaving a Woman’s Life: Spiritual Lessons from the Loom.
You can read about Paula’s writing process here.

Each writer who participates in the blog hop answers four specific questions, then invites two or three other writers to do the same. As I’ve discovered from reading other posts in this project, even a seemingly simple Q&A can reveal a lot about a writer and her process, especially for writer who is answering the questions.

What am I working on right now?

The working title is By Magic Bound. It’s a contemporary romance best described as magical realism. The elevator pitch: Magic backfires when a desperate, inexperienced witch casts a binding spell on the young man she loves.

Set in a fictional Connecticut coastal village, the geography for this new effort is a far cry from the wild, wild west of my other novels. What unites all of them is some aspect of the metaphysical world. There was a touch of the magical in Band of Gold and First and Forever, much more in Just a Miracle. Not only is By Magic Bound filled with the practical, everyday elements that make a magical life, it also features a curse from the 1800s when life in the village revolved around the whaling industry. I haven’t really left the historical romance world behind after all.

How does my work differ from others of its genre?
Although By Magic Bound involves a family of witches, the story does not fit today’s idea of the fantasy or dark paranormal. There are no vampires other than the narcissistic mother whose declining mental health drains her daughters of their freedom. There are no magical beasts other than an old mutt who opens the heart of a bitter old man. There is no handsome prince other than a beaten down hero determined to amount to something. No beautiful princess other than a young witch who finds herself pregnant and, once again, abandoned. There are no shapeshifters other than—oops—can’t give that away.

Why do I write what I do?
Seeing how fictional characters deal with life-changing situations can help us deal with challenges in the real world. In her book Wired for Story, Lisa Cron takes that idea even further, saying people read stories for clues to survival. I can’t say I was consciously thinking about that when I wrote Just a Miracle. I just wanted to tell a story. After the fact, I could see the wisdom of Cron’s words. Just a Miracle is set in a small Montana town during the summer of 1890 and features a heroine who lost her mother years earlier and a motherless little girl who has what we now refer to as Down’s Syndrome. The hero is a snake oil salesman in a traveling medicine wagon. A botched medical procedure destroyed his dreams of playing professional baseball. He’s bitter and now believes only in the dollar. The heroine is a pharmacist. She comes from a long line of women who heal using herbs, chants, and the cycles of the moon. An early effort proved fatal. She’s afraid and now believes only in science. Each has nothing but disdain for the other’s choices – until an old man’s life depends on the magic the heroine has kept locked away in her heart. The story is a romance so you know it ends on a hopeful note. In the process, wounds are scraped raw. Can the hero accept his disability? Can the heroine accept her destiny?

When Just a Miracle was first published, an editor at Rawhide & Lace referred to the story as “reminiscent of LaVyrle Spencer.” To me, LaVyrle’s books are known for exploring serious family situations and emotions that are as gut-wrenching as they are honest. That’s my goal.

How does my writing process work?
After years of trying to concentrate on only one project at a time, I've surrendered to my need to always hold two pens. One might be scribbling away at a novel, the other on a wedding ceremony, or questions for a television interview. I don't see the various efforts at diluting effort. My brain thrives on the workout!

When the project is a novel, I start by finding pictures of my hero and heroine. I need to know what they look like now and what they looked like as children. That’s key, because what happened to them between then and now can reveal what Academy Award-nominated and Emmy-winning filmmaker Jerome Gary calls a character’s broken narrative.

A few years ago, I had the serendipitous good fortune to be in a small conference room with no one but Jerome Gary and screenwriter Peter Fox. Jerome explained the broken narrative as that which would have unfolded in a certain way but doesn’t because of something that happened to the character in the past. That one concept unlocked the treasure chest of story for me and gave deeper meaning to a plaque that hangs in my kitchen. It reads, “Home is where your story begins.”

I expand that look to the past and create a family album for each of the main characters. More pictures. More broken narratives. Is there a family trait, a family gift, a family curse? Only when I feel I have a strong foundation for who my main character is and how she got that way do I move forward with the story.

Click Edit on the top toolbar to begin blogging.